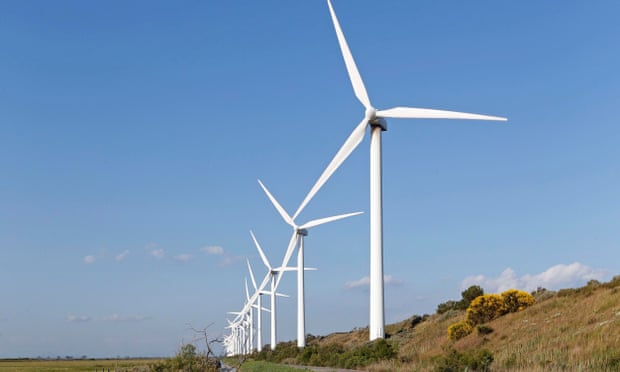 Christel and Luc Fockaert awarded €110,000 after over health problems they claim were caused by windfarm

A French court has recognised “turbine syndrome” after a couple complained their health was damaged by living near a windfarm.

In what is believed to be the first judgment of its kind in France, Belgians Christel and Luc Fockaert were awarded more than €100,000 in compensation by the judge in Toulouse.

The couple claimed they experienced a range of health problems including headaches, insomnia, heart irregularities, depression, dizziness, tinnitus and nausea for more than two years, insisting these were caused by six wind turbines set up 700 metres from their home at Fontrieu in the Tarn, southern France.

The turbines had been installed in 2008. However, it was reported that the couple’s health problems started five years later. The Fockaerts believed this was because woodland between their property and the nearest turbine was cut down.

They singled out the noise, which they said was “comparable to a washing machine continually turning”, and the “white flashing lights” on the turbines, as particularly detrimental to their health.

“We didn’t understand straight away, but little by little we realised the problem came from the turbines,” Christel Fockaert said. “The turbines flash every two seconds … we had to have outside lights to counter the effect of the flashes.”

The couple moved away from the area in 2015 and said their health problems disappeared shortly afterwards.

Doctors failed to find any health problem, but a court expert said turbine syndrome had been previously identified by scientific research.

However, an Australian study found sickness attributed to wind turbines is more likely to have been caused by people getting alarmed at the health warnings circulated by activists. Researchers said it was “essentially a sociological phenomenon” and that giving it a name like “wind turbine syndrome” and “vibro-acoustic disease” was a key feature in its spread.

Other peer-reviewed studies in Europe, Canada and the US have also debunked the alleged “syndrome” – that is not medically recognised – suggesting it is adverse publicity, opposition to the turbines or the power of negative expectations and suggestions that might be making people feel sick.

The Fockaerts’ case was originally thrown out of court in January last year but they appealed, saying the judge had ignored the experts’ reports they had commissioned and instead had gone to see for themselves but had spent only an hour at the site of the complaint.

The energy companies Sasu, Margnes Energie and Sasu Singladou Energie, which run the park, were ordered to pay €110,000 in compensation to the couple and were reported to have since changed the lights and speed of the six turbines.

Alice Terrasse, the couple’s lawyer, told French television: “It’s an unusual case and as far as I know there has been no precedent.”

The ruling is expected to spark a flood of complaints, but Terrasse warned against others seeking to profit from the Fockaerts’ victory.

“This case cannot be reproduced. This (wind) park caused an unusual nuisance because of its configuration but each case is different and should be examined differently.”

She added that the judgment should serve as a warning to those companies setting up windfarms to reflect carefully on their impact on the local population.

“We already consider environmental issues and biodiversity, and occasionally the impact on landscapes, but not enough the issues of human health. This could create a jurisprudence and, above all, make the regulations evolve,” he said.