Kythera at the World Trail Congress 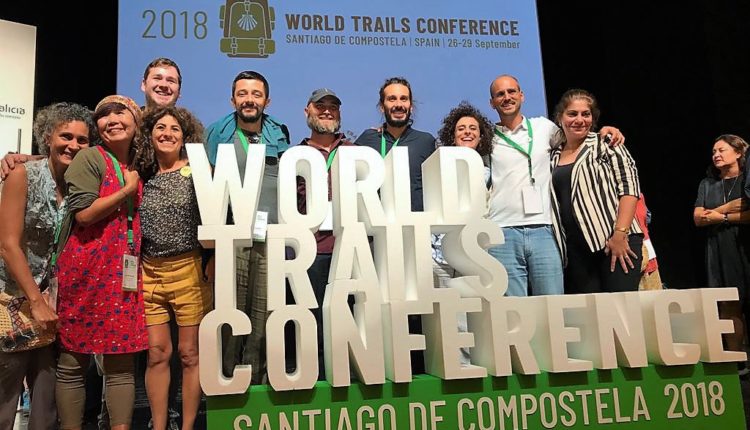 The trails as a lever for sustainable tourism development – Rigas Zafeiriou

The 7th World Trail Conference, held in Santiago, Spain on 26-29 September 2018, was a unique experience for all trail professionals who attended. The programme for the development of paths and sustainable tourism of Kythera ΄Kythera Hiking΄ had a dynamic presence and was one of the most discussed projects of the conference.
Some of the best trails in the world participated in the conference, such as the famous Camino de Santiago that hosted it, the Appalachian Trail in the USA and the Bruce Trail of Canada, with which Kythera is twinned.

The conference included dozens of lectures, workshops, special events as well as the first film festival for trails. Among the speakers were Manuel Butler Halter, Director of the United Nations World Tourism Organization (UNWTO), Suh Myong Sook, inspirer of the World Trail Conferences (Jeju Olle, Korea), and Galeo Saintz, President of the World Trails Network.
At the ‘Paths and Culture’ session, Rigas Zafeiriou presented the methodological approach, tools and innovations developed by MedINA (Mediterranean Institute for Nature and Anthropos) for the integrated management of the Kythera trail programme. On the last day, Phoivos Tsaravopoulos, from the Social Co-operative Enterprise Paths of Greece, presented Kythera as a hiking destination with reference to the rich cultural and natural heritage, the amazing variety of landscape and the other unique features of the island.

The paths of Kythera attracted great interest and contacts were made with players and professionals in the field for important collaborations in the future. The people of Kythera Hiking played a key role in coordinating the Mediterranean organisations and laid the foundations for the creation of the Mediterranean Node of the World Trail Network. One of the first ideas proposed for the Mediterranean Node is to attract volunteers from America for maintenance work on the Kythera trails, as well as the twinning with the Lebanon Mountain Trail.

Speakers from all over the world referred to the successes and analysed the challenges they face by developing various topics such as the modern use of paths, marketing, network sustainability, urban paths, pilgrimage routes, etc. The conference highlighted the multidimensional contribution of the paths to tourism, local economies, the preservation of cultural and natural heritage but also to leisure, exercise and the health of all of us.

Finally, needs were identified such as: more focused scientific approaches, the exchange of know-how for the sustainable construction of paths, the creation of a toolbox for data collection and the strengthening of the role of audiovisual in disseminating the values of paths. The future of the trails is extremely promising, as hiking is now the most popular activity in the fast-growing activity-based tourism industry worldwide.

More information:
Kythera Hiking: It is the programme for the development of an integrated network of trails and sustainable tourism in Kythera that is supported and implemented by the Kytherean Foundation for Culture and Development (KIPA), the Municipality of Kythera & Antikythira, the Domestic Estate Management Committee of Kythera & Antikythera and the Mediterranean Institute for Nature and Anthropos (MedINA). Our vision is to preserve and enrich the natural and cultural heritage of our island, contributing to the prosperity of the local community. [Links: http://kytherahiking.com/ / https://www.facebook.com/kytherahiking/]

World Trails Conference: The World Trails Conference is organised by the World Trails Network every two years. This year, the conference, in its 7th edition, was hosted for the first time in Europe. The first conference was held in 2010 by the Jeju Olle Foundation on the island of Jeju in Korea. The next four conferences were also held there. The 6th Congress took place in Tottori, Japan, which has twinned with Kythera. [Links: https://santiagoworldtrails2018.com/ / http://worldtrailsnetwork.org/conference2018/]

World Trails Network: It is the world trail organisation officially established in 2012 at the 3rd World Trails Conference. It is non-profit based in Switzerland and has two Regional Nodes: the Node of America and the Node of Asia. This year’s conference laid the foundations for the creation of the Mediterranean Node. The mission of the World Trails Network is to upgrade the trails and the progress of the international trail industry. [Links: https://worldtrailsnetwork.org/]