It is one of the oldest settlements of Kythera and its name refers to the ‘river with the watermills’. During Venetian and subsequently British rule, Mylopotamos was one of the 5 administrative regions of the island and included the villages of Areous, Kalokairines, Zervianika, Dokana, Fratsia and Viaradika. In the 18th century Mylopotamos had 9 parishes with a population of 650 people. These were St Sostis in Platanos, St Triada in Piso Pigadi, St George in Riza, St Nicholas and St Demetrios in Kato Chora, and Mesochoritissa, St John, St Athanasios and St Elias in Kastelli. From the 18th century many residents of Mylopotamos emigrated to Smyrna, where they excelled in shipping operations. After World War II, many locals emigrated to America and Australia. Notable personalities originate from Mylopotamos such as dermatologist professors George and Panagiotis Fotinos, Ioannis Stratigos, and master musician Miltiadis Karydis among others. 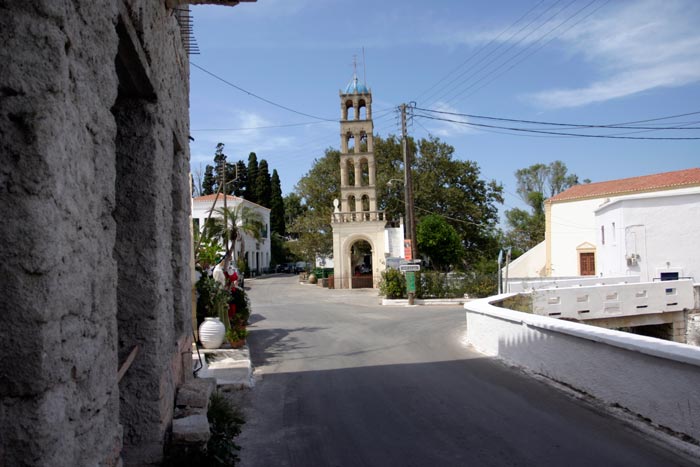 In the 18th century it is mentioned as belonging to the Darmaros family, together with Panagia Orfani. At that time it was the only parish in the upper district of Mylopotamos.

It was built in 1901-1902 with the actions of the Kytherian Minister Spyros Stais under the legacy of the national benefactor, Andreas Syggrou. In 1923 there were 43 students and the school operated until 1978. Since then, the students of Mylopotamos attend the school of Karvounades.

According to testimony, during the 18th century it was a deserted temple and the place around it was stony and unformed. Around the year 1760 pastor priest George Logothetis shaped the surrounding area, built auxiliary spaces and beautified the church. In 1894 the financially strong Community of Mylopotamos decided to demolish the old nave and in its place built a new majestic church. The work was undertaken by the contractor Antonios Vlantis from Kalokairines, who built a vaulted church from the ground up and handed it over in 1895. The iconostasis was built with top quality marble from Tinos and is the work of the Tinian artist Georgios Kaparias, who also paved the floor with black and white marble stone from Tinos. Among the relics of the church originating from Smyrna, the epitaph stands out as an exact copy of the famous epitaph of Saint Fotini, of the Diocese of Smyrna.

The castle town of Mylopotamos 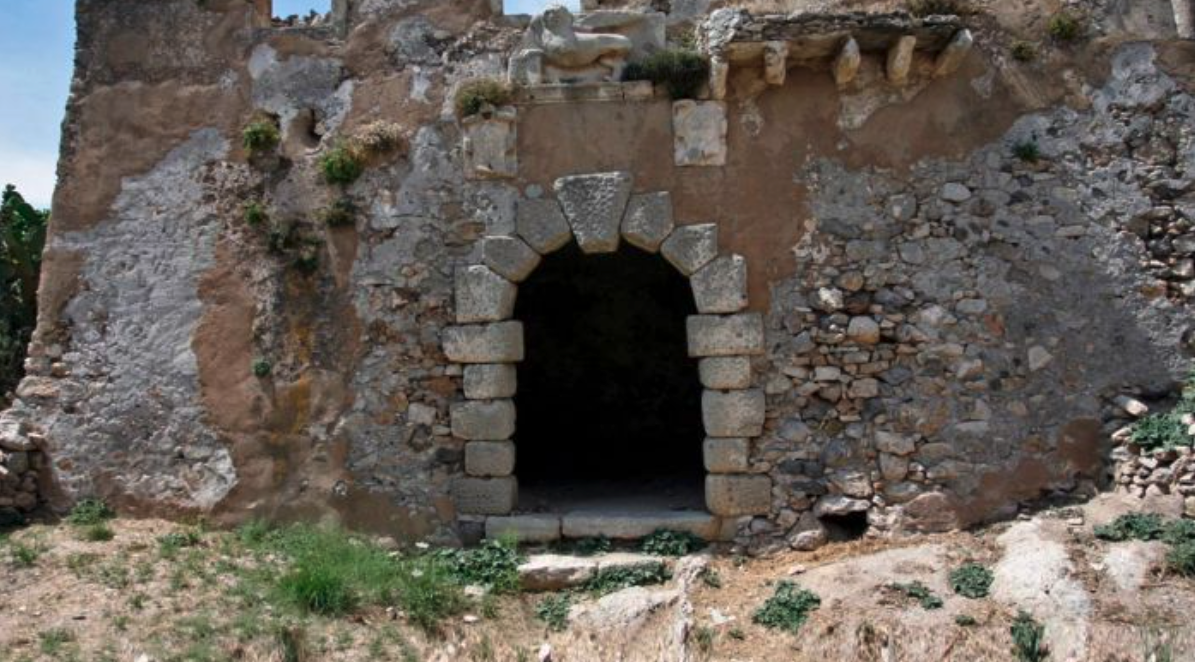 During the 16th century 3 fortresses sites are mentioned in Kythera: Kaspali, Agios Dimitrios in Paliochora and Mylopotamos, due to the 3 provinces that were set up in Kythera during the Venetian occupation, led by the governors who supervised the area. After the invasion of Barbarossa in 1537 and the destruction of Paliochora, it seems that the castle of Mylopotamos was reinforced, because it was invaluable for guarding the Ionian Sea. The Venetian Foreman Soranzo placed a guard. In the year 1545, 50 families lived there. In 1565 the castle was reinforced again and a monumental entrance with a motif of the Marcian lion and the date was added. The fortress was locked at night with an iron gate that opened at sunrise. The castle encloses a true medieval necropolis with 7 temples dating from 16th-17th century with valuable murals of various phases. These temples are Panagia Mesosporitissa, Profitis Elias, Agios Athanasios, Prodromos, Chrysostomos, Agios Kosmas and Metamorphosis. The parishioners were buried inside the temples, a custom that continued until the creation of community cemeteries. The Castle was inhabited up until the 50’s, when it was abandoned by its last inhabitants.

The school in Kato Chora

According to the built-in marble slab above the school entrance, it was built in 1825, like most schools of that era. The building is vaulted with a wall thickness of about 1 metre and has 7 large gothic windows all around. The inscription on the marble slab writes: “AESTHETICIANS OF THE UTILITIES OF THEIR UPBRINGING AND ENCOURAGED BY PATRIOTISM THE PEOPLE OF MYLOPOTAMOS PUT ALL THEIR EFFORTS TO BUILD THIS SCHOOL IN DEDICATION TO THE NEXT GENERATIONS 1825. EALDORMAN ATHANASIONS KARYDIS. MASTER BUILDER PAN. STRATIGOS”. The first teacher of the School is the well-known Petros Marcelos, whose bust is in the courtyard of Agios Georgios in Karvounada. In 1825 there were 80 males from 5 to 28 years old, among whom 64 were from the area of ​​Mylopotamos and the rest from Karvounades, Dokana and Kalokairines. The School seems to have been open all year and the students paid some amount for tuition. The School operated after the Union with Greece up until 1902, when the new Primary School of Mylopotamos was built. 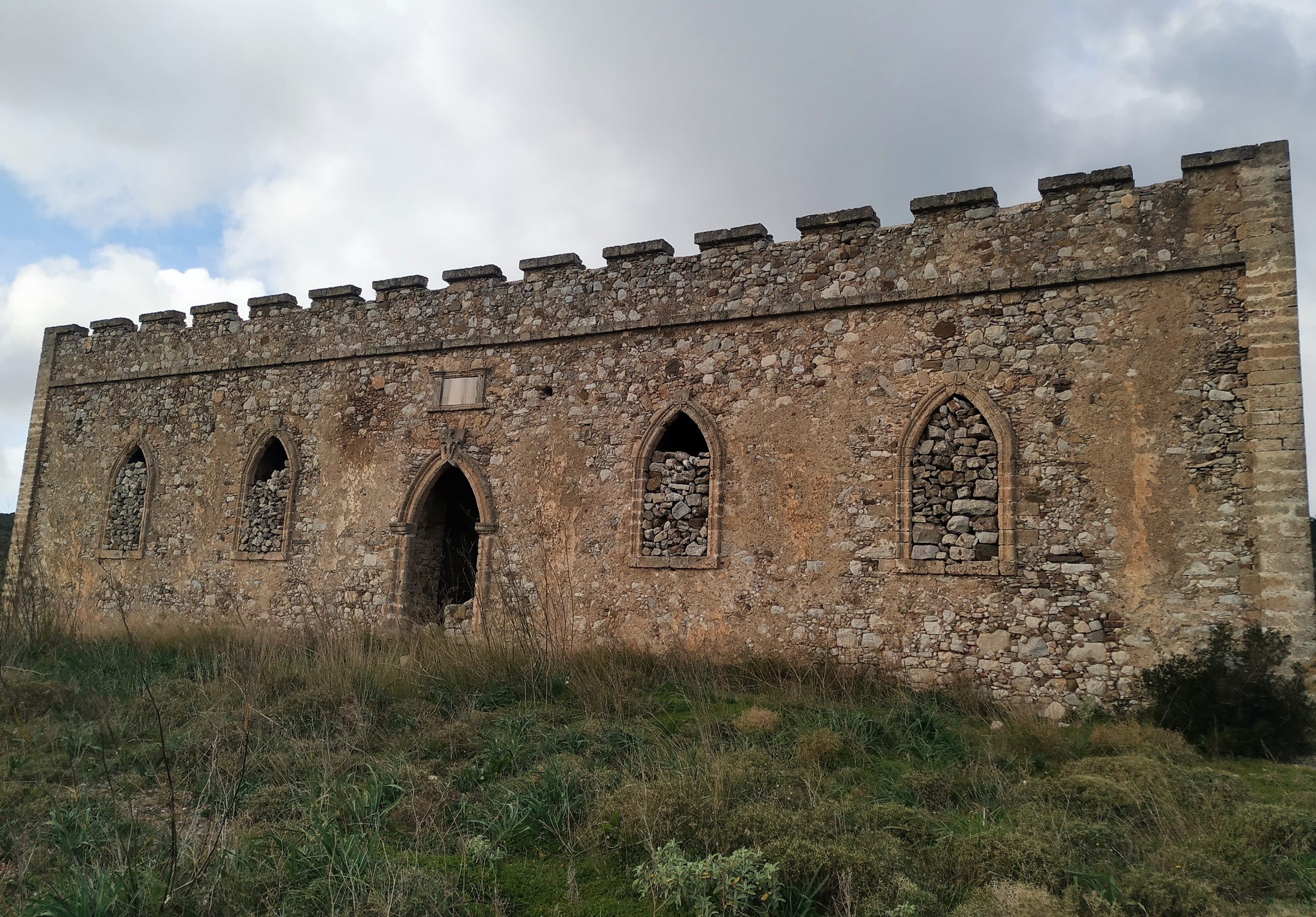 The watermills of Mylopotamos are located in the ravine. 17 watermill buildings have been identified, but a total of 22 are noted. Most of them lay in ruins, while 2 or 3 maintain some parts of their mechanism. A contract in the year 1565 mentions a watermill in Mylopotamos that was given as a dowry. The owners of the watermills were initially the nobles and the feudal lords, who owned 2/3 whereas the miller owned the rest. The watermill, apart from being a workplace, was also a living space so next to the mill there was an oven, a stable and auxiliary spaces. The watermills area of Mylopotamos was once full of life with births, baptisms, feasts, dowry contracts and wills. Even the litany of the icon of Myrtidiotissa coming from Skliri passed through the paths of the mills to reach Mylopotamos. No doubt, life in the watermill had accidents and great difficulties due to the humidity. The length of the canal that connects the watermills was 1 km. The watermills were in operation until the 1950s to grind cereals. Most watermills were at ground floor level, while 3 of them were two-storey. The upper floor was the miller’s residence, while on the ground floor was the drive mechanism as well as the auxiliary spaces. The watermill consists of the porous vertebrate water tower (βούτσι) of 5-6 meters high, as well as
a wickerwork hamper with lid (κοφινίδα), space for a drive mechanismζουρίο), a spout nozzle (βροχώνι), the flour jar (αλευροδόχη), the stopper (σταματήρα), the shaft (άξονα), the sails (φτερωτή), and the millstones. These millstones were volcanic porous rock imported from Milos. First in the row before the waterfall was the Mill of Gazaou.
Another one, the Mill of Famozaina was to later become the cafeteria Neraida. The “upper-lower” (ανωγοκατωγα) were 4 mills, of which one’s roof was the floor of the other. People came from all over the island to the watermills of Mylopotamos, until gradually the diesel mills replaced the traditional watermills in the 50’s. These monuments are very important for studying the past of Kythera: in addition to their folklore value, they are associated with the history of the economy on Kythera and they are also located in an area of ​​exceptional natural beauty. 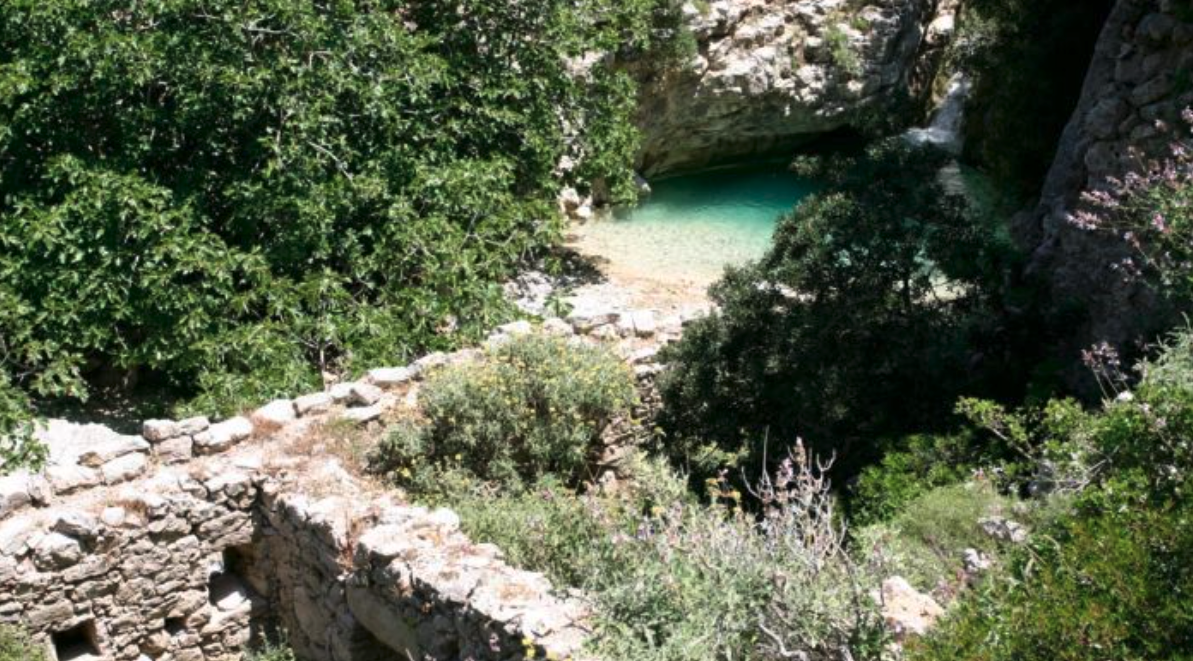 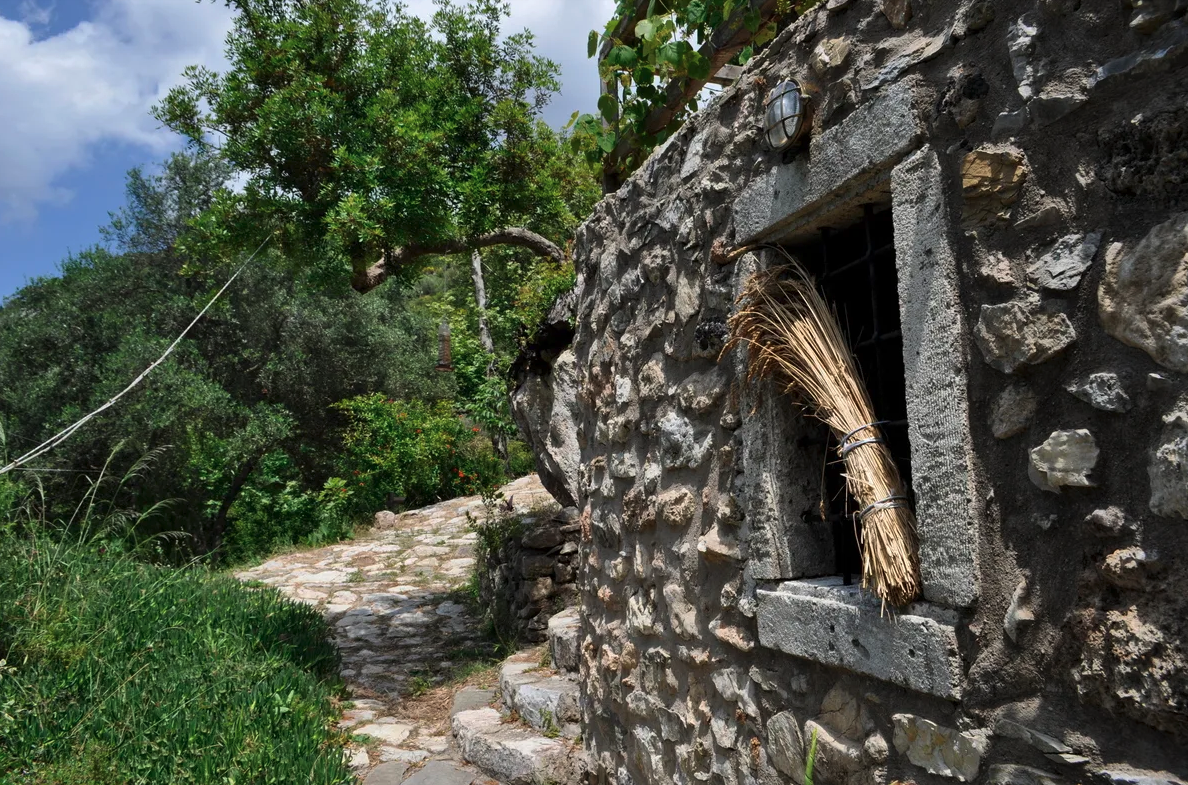