The signposting of the paths of Kythera has been completed 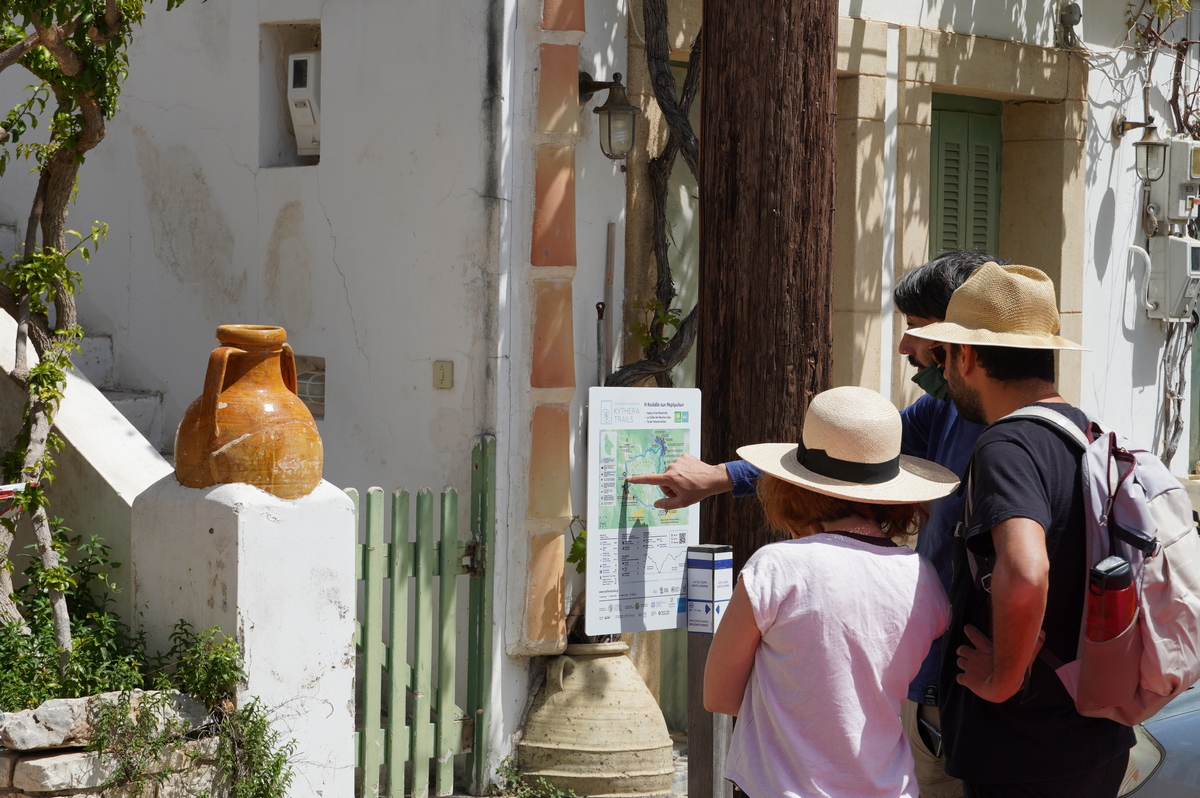 The paths of Kythera, ´Kythera Trails’, have acquired their signposts, which provide the necessary information to visitors to start their tour.

24 signs adorn 16 settlements and starting points, presenting the 11 routes of the network. This is the completion of a three-level signposting of the trail network.
The signs contain the ‘identity’ of each route. They provide a lot of information, but have a simple and minimal design and small size, so that they work well with space, without visual disturbance.

The signs are divided into 4 parts. At the top is the title and code of the route, marked ‘Green Flag Trails’, on the three certified routes of the network. In the central part the route map is displayed, which is a product of a specific cartographic edit. Particular emphasis was placed on the names of points of interest, even the lesser known ones, such as the watermills of Karavas. Further down are the key data of the routes, such as distance and degree of difficulty, which are fully harmonised with the Green Flag Trails certification standards. Also QR codes can help users download the route files on their mobile phones. Finally, at the bottom of the sign, all partners, contributors and supporters of the programme are mentioned, and the GNTO Greek National Tourist Organisation (ΕΟΤ) logo is displayed.

The activity was funded by the Mediterranean Institute for Nature and Anthropos (MedINA) and the Municipality of Kythera and was implemented in collaboration with the Kytherean Foundation for Culture and Development (KIPA). The signs were developed and placed by the Social Co-operative Entreprise ‘Paths of Greece’. The maps were edited by Staridas Geography, while the graphic design was done by Instinct Design. 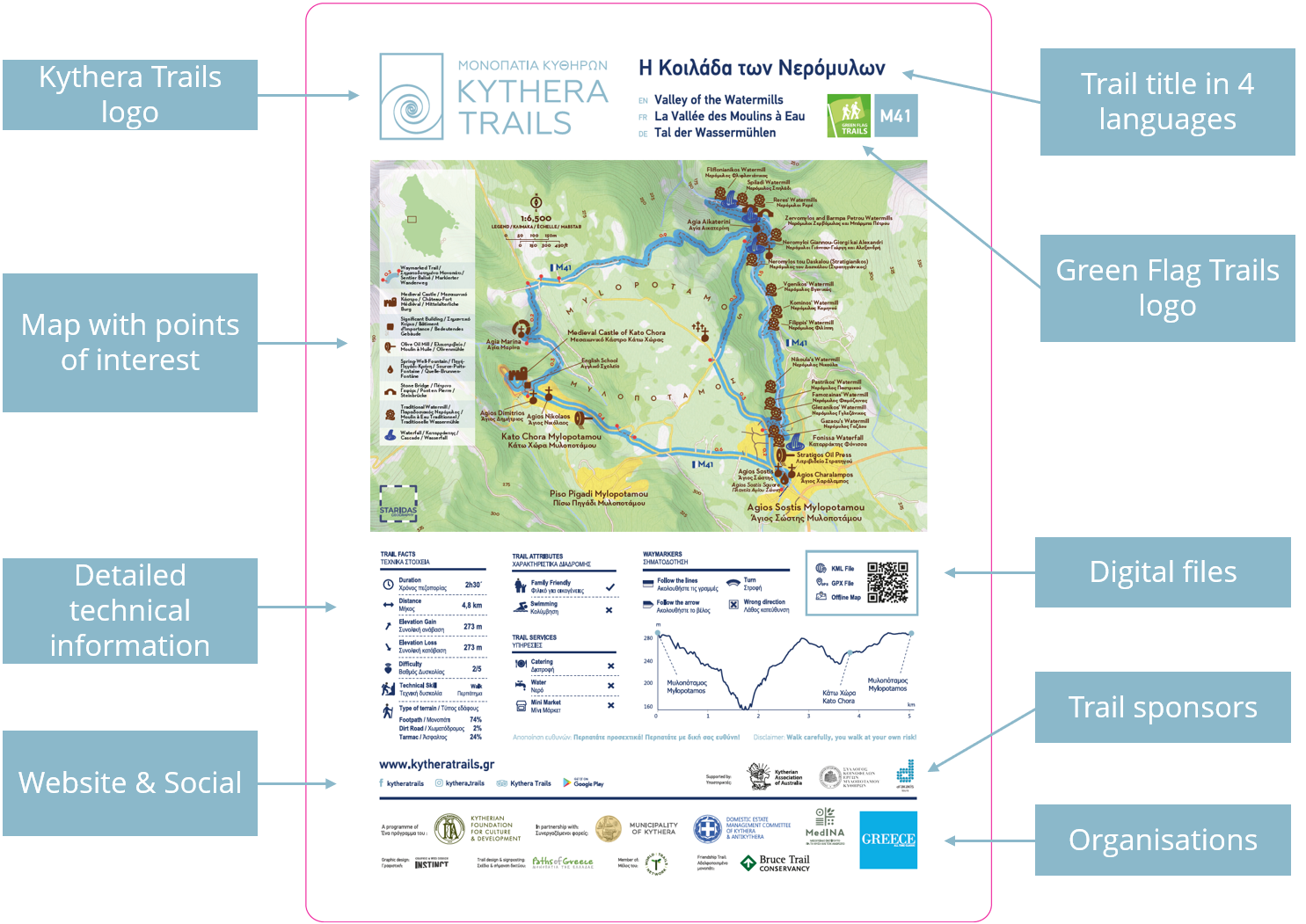 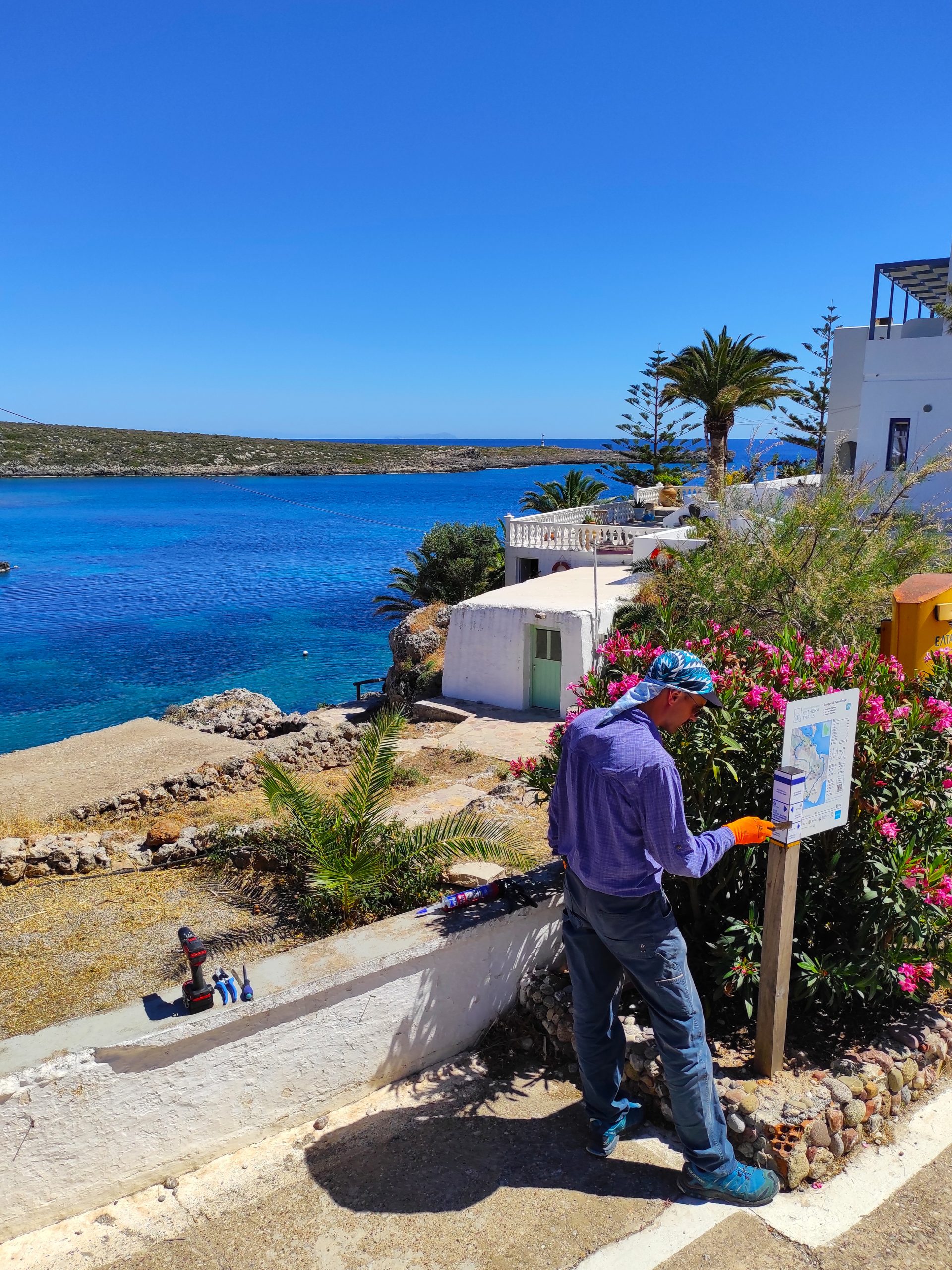 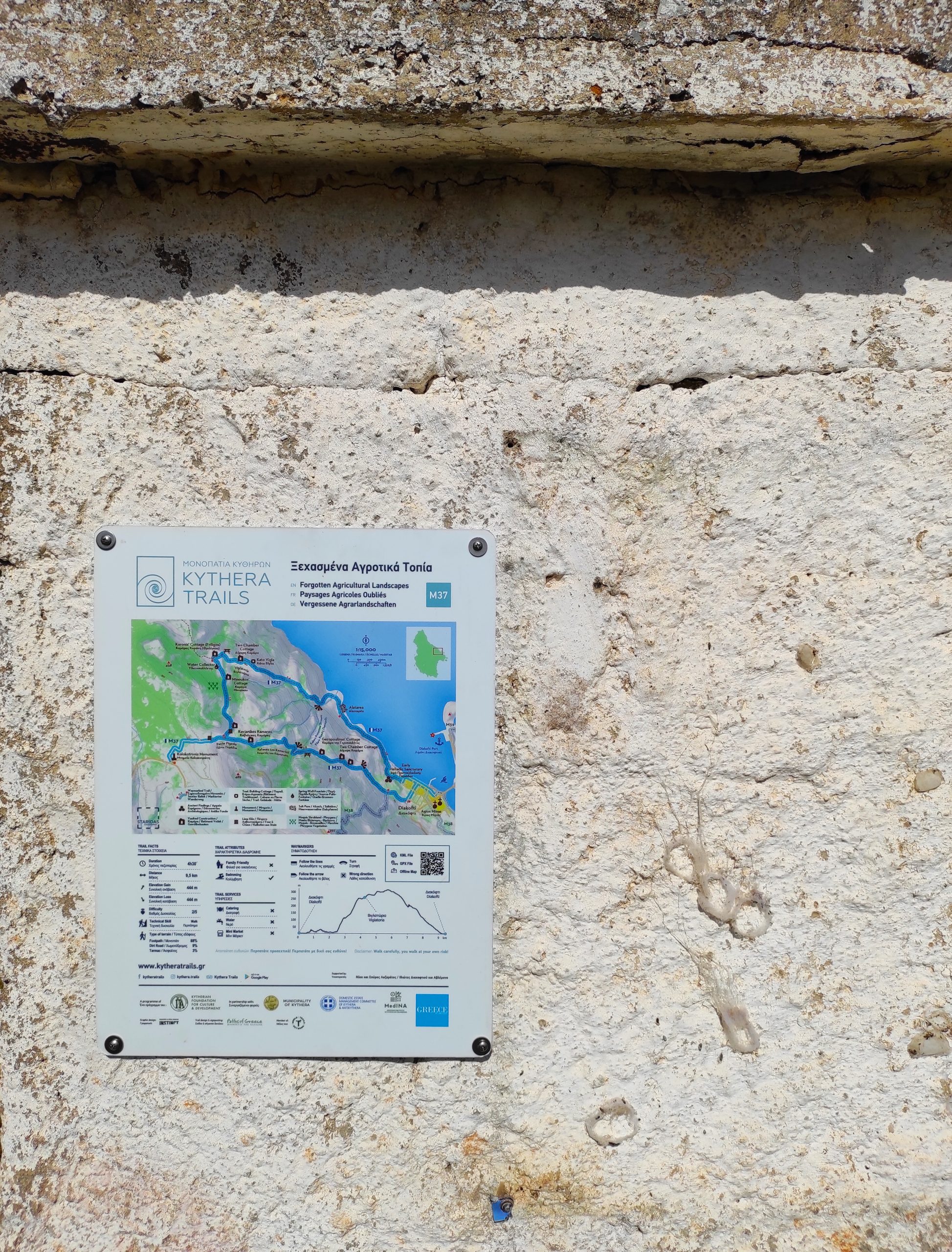 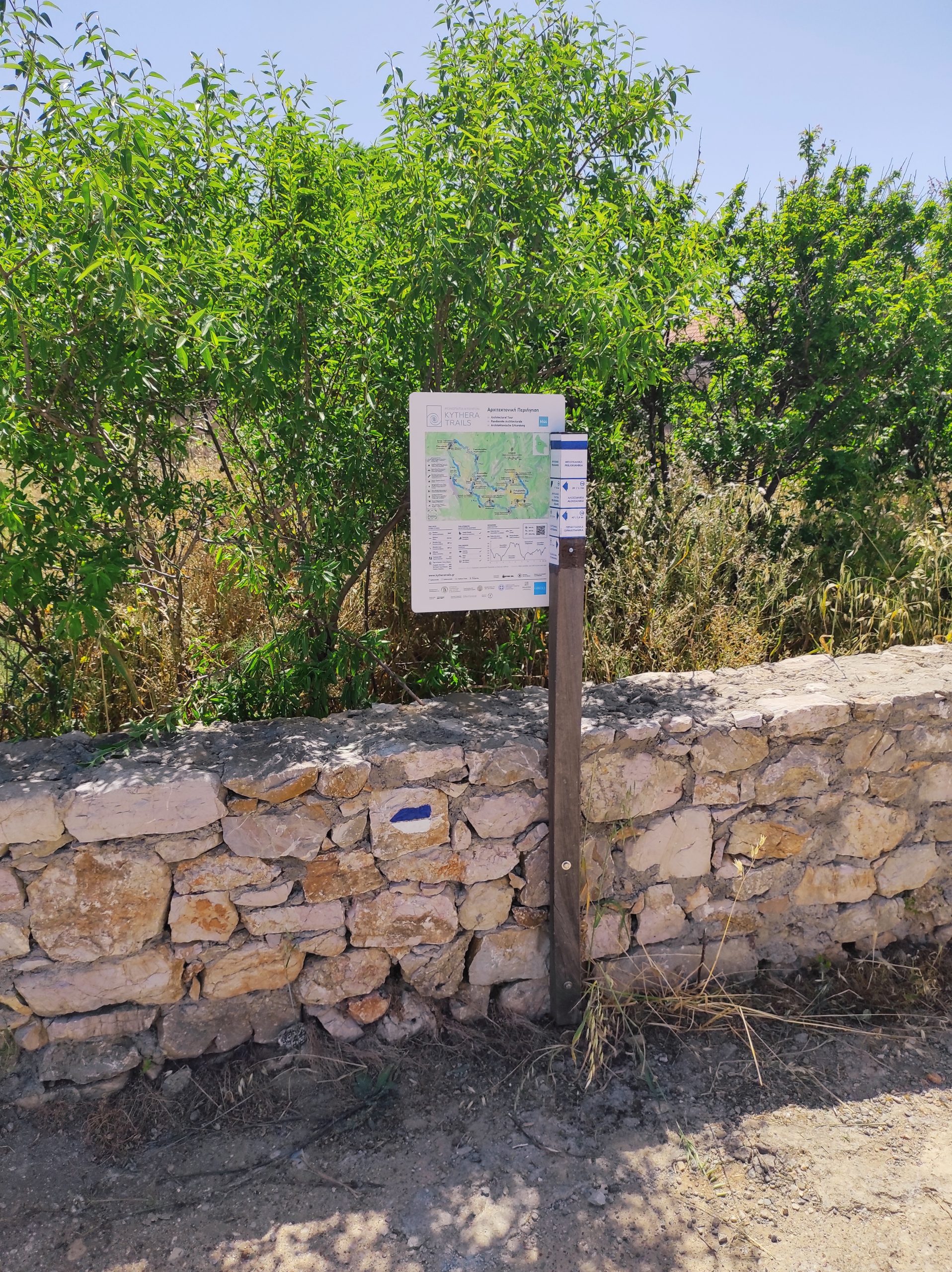 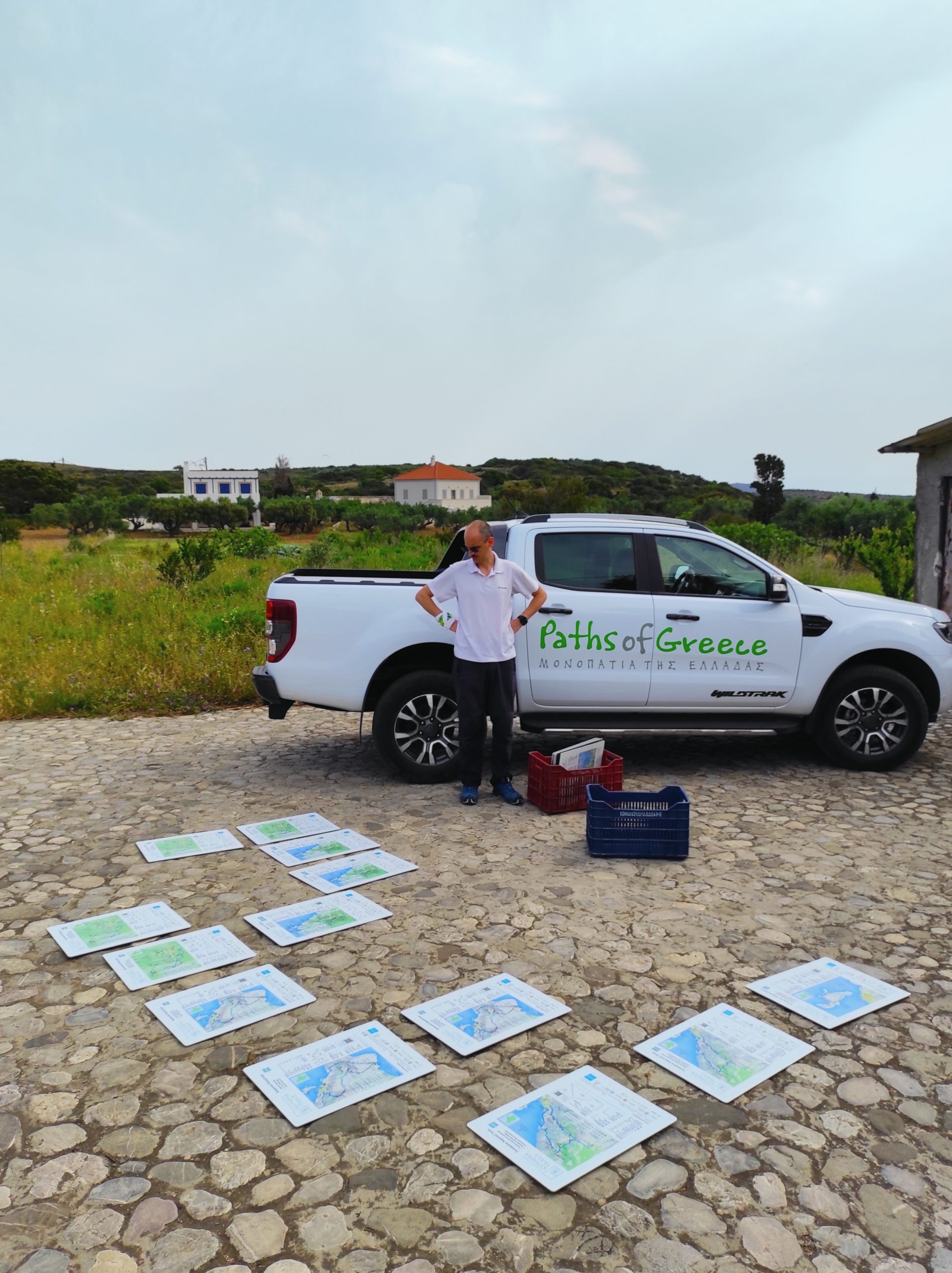 Kythera Trails: Kythera Trails is the official network of trails of Kythera, with 14 routes with a length of 100 km. Our vision is to preserve and enrich the natural and cultural heritage of the island, contributing to the prosperity of the local community. Visit us: Facebook / Instagram / Youtube / Web

The programme is supported and implemented by the Kytherean Foundation for Culture and Development (KIPA) in collaboration with the  Kythera Municipality, Domestic Estate Management Committee of Kythera & Antikythera, and Mediterranean Institute for Nature and Anthropos ( MedINA).

The Mediterranean Institute for Nature and Anthropos (MedINA): MedINA was founded in 2003 and its mission is to encourage people to appreciate the link between their cultural and natural heritage and to work for a fair and sustainable future.
More information: Web / Facebook / Instagram

Paths of Greece: The team behind the Social Co-operative Enterprise ‘Paths of Greece’ founded it in 2010 with a vision to make Greece one of the top 10 hiking destinations in the world. Driven by love for the culture, nature and the people of Greece, it brings out the best of the old paths of a place, in a way that meets the needs of the modern hiker.
Visit us:  Web / Facebook / Instagram